The European hydrogen strategy: increasingly central in the fight against climate change

The European Commission recently (July 2020) published its hydrogen strategy for a climate-neutral Europe, in which it sets out the roadmap to speed up the development of hydrogen. 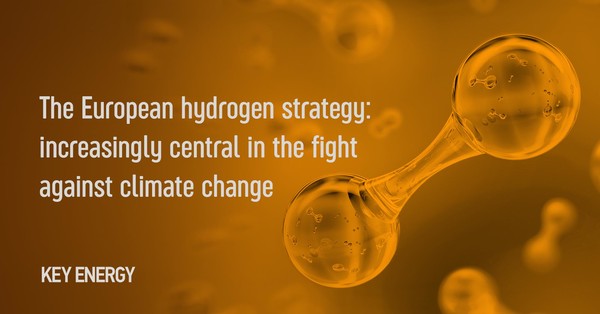 Hydrogen is enjoying a renewed and rapidly growing attention in Europe and around the world. It can be used as a feedstock, a fuel or an energy carrier and storage, and has many possible applications across industry, transport, power and buildings sectors. The role of this energy carrier is set to grow significantly in reducing greenhouse gas emissions, to the extent that Europe has recently allocated significant resources to it, including through the “Next Generation EU” fund.

The EU’s commitment to reaching carbon neutrality by 2050 is also supported by Europe’s hydrogen strategy. The priority for meeting European 2050 carbon-neutrality objectives is to develop green hydrogen over the long term, promoting an integrated energy system, and low-carbon (blue) hydrogen in the short- and medium-term transition phase, capable of rapidly reducing emissions resulting from existing hydrogen production and support the development of a sustainable market on a significant scale. The EU strategy has defined a very ambitious timetable, which sets out a first phase (2020-2024) in which to decarbonise existing hydrogen production; a second phase (2025-2030) in which green hydrogen will become a substantial part of an integrated European energy system; and a third phase (2030-2050), in which green hydrogen technologies should reach maturity to be deployed on a large scale, making a substantial contribution to decarbonisation by 2050.

Various technologies can be used to produce hydrogen. At present, 95% of European hydrogen is grey hydrogen, which uses fossil fuels as the raw material and generates carbon dioxide emissions, for example steam methane reforming (SMR). If the processes are then associated with carbon capture, use and storage systems, it is known as blue hydrogen. Only 5% is created from processes using electrolysers for the dedicated production of hydrogen, and when the electricity used in the process is generated by renewable sources, this is green hydrogen, which represents the objective towards substantial decarbonisation.

Hydrogen: the need for an efficient market

The main barriers to the development of the hydrogen sector are currently the rather low demand and high production costs. In this sense, the European Union aims to promote the creation of an efficient hydrogen market that increases its share within the energy mix.  Only an open and competitive market with prices that reflect energy carriers’ production costs, including carbon costs and external costs and benefits would efficiently provide clean and safe hydrogen to end users. To obtain equal treatment of hydrogen with other carriers, we therefore need to ensure there is no distortion in the relative prices of different energy carriers. “Price-based” policies enable users to make “informed” decisions about which energy carrier to use.

At the same time, we need to invest massively in research to enable technological development that reduces the current high production costs. Research into hydrogen must be focused on production systems, transport and storage systems and on end users. This must be based on cooperation between the various players, with particular attention paid to the development of vertical application activities on the entire value chain that enable technology transfer and training. Numerous European funding programmes aim to contribute in particular by stimulating private investment and the development of projects demonstrating innovation.

Hydrogen: all the challenges to be met

Deploying hydrogen in Europe faces important challenges that neither the private sector nor member states can address alone. Driving hydrogen development needs critical mass in investment, an enabling regulatory framework, new lead markets, sustained research and innovation into breakthrough technologies and for bringing new solutions to the market, the building of a large-scale infrastructure network, widespread training, actions that the EU can support as well as being a driver of cooperation with non-EU country partners. A joint effort at national, EU and international level is therefore needed.